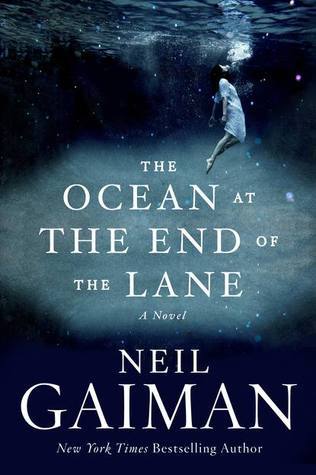 Title: Ocean at the End of the Lane
Author: Neil Gaiman
Rating:

Sussex, England. A middle-aged man returns to his childhood home to attend a funeral. Although the house he lived in is long gone, he is drawn to the farm at the end of the road, where, when he was seven, he encountered a most remarkable girl, Lettie Hempstock, and her mother and grandmother. He hasn’t thought of Lettie in decades, and yet as he sits by the pond (a pond that she’d claimed was an ocean) behind the ramshackle old farmhouse, the unremembered past comes flooding back. And it is a past too strange, too frightening, too dangerous to have happened to anyone, let alone a small boy.

A groundbreaking work from a master, The Ocean at the End of the Lane is told with a rare understanding of all that makes us human, and shows the power of stories to reveal and shelter us from the darkness inside and out. It is a stirring, terrifying, and elegiac fable as delicate as a butterfly’s wing and as menacing as a knife in the dark

Neil Gaiman accomplished so much in this 181 stand alone fantasy. A good fantasy standalone is impressive, a good fantasy standalone thats under 200 pages is even more impressive. This isn’t a kingdoms-and-swords kind of fantasy, it falls on the paranormal side of things. It’s hard to determine what age group this was written for; while the story does follow a 7 year old boy, it’s told as a memory of his adult self and there are a couple of scenes thrown in that makes one thing certain: it isn’t one of Gaiman’s middle grade books. END_OF_DOCUMENT_TOKEN_TO_BE_REPLACED 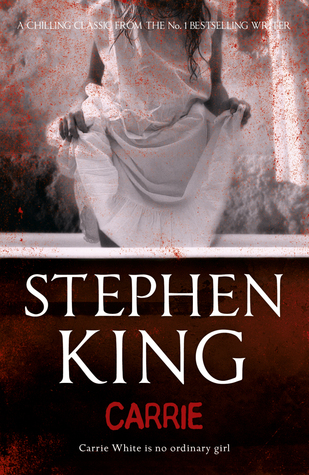 Carrie knew she should not use the terrifying power she possessed… But one night at her senior prom, Carrie was scorned and humiliated just one time too many, and in a fit of uncontrollable fury she turned her clandestine game into a weapon of horror and destruction…

END_OF_DOCUMENT_TOKEN_TO_BE_REPLACED

Goodreads Synopsis: A mysterious island. An abandoned orphanage. A strange collection of very curious photographs.It all waits to be discovered in Miss Peregrine’s Home for Peculiar Children, an unforgettable novel that mixes fiction and photography in a thrilling reading experience. As our story opens, a horrific family tragedy sets sixteen-year-old Jacob journeying to a remote island off the coast of Wales, where he discovers the crumbling ruins of Miss Peregrine’s Home for Peculiar Children. As Jacob explores its abandoned bedrooms and hallways, it becomes clear that the children were more than just peculiar. They may have been dangerous. They may have been quarantined on a deserted island for good reason. And somehow—impossible though it seems—they may still be alive.A spine-tingling fantasy illustrated with haunting vintage photography, Miss Peregrine’s Home for Peculiar Children will delight adults, teens, and anyone who relishes an adventure in the shadows.